The auto industry, including stocks such as General Motors, appear to be taking a turn for the worse. Of note, autos were one of the leaders in the recent stock market flop. This does not bode well and signals the domestic economy is weakening. Autos have been a major driving force of US economic growth for years, particularly during the post-crisis recovery, and if it were to weaken another major pillar of support would be removed.

Here’s a chart of the Dow Jones US Auto Parts Index to illustrate a general overview of auto stocks for the past two years: 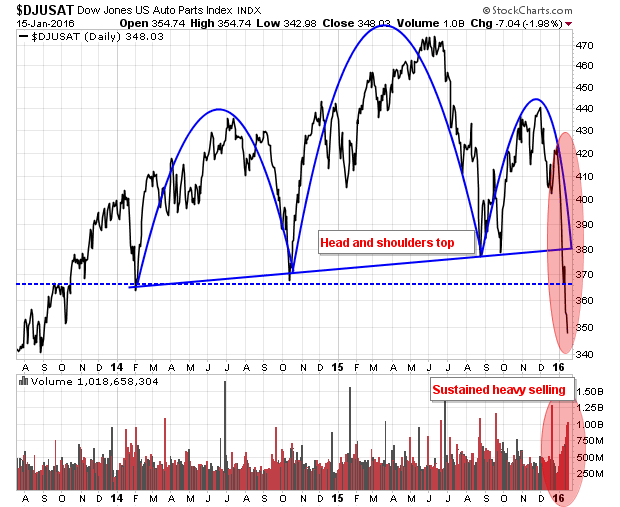 I have a highlighted what looks to be a large head and shoulders chart pattern. This is a bearish (negative) pattern that indicates further declines. Moreover, the chart pattern is now valid and confirmed as price has closed below the neckline (the solid straight blue line). If so, the target price for this drop would be approximately 290-300.

Looking at the volume chart it can be seen that selling was heavy and sustained. This was one of the largest and steepest drops since 2011. Price is now back where is started in 2013.

Looking at the chart longer term (ten years) we can see that there is no nearby significant support. The next area of support would be where I have highlighted the two trendlines in the chart below (270-300). This level fits in line with the price target for the head and shoulders top I highlighted earlier in this post.

The overall picture is negative. In the long term it is likely price will continue falling to test its upward trend line at approximately 270-300 (upwards sloping blue trendline on the chart above). This obviously is not a good sign and signals a weakening US economy. Should price penetrate and break this long-term trendline then it would signal serious weakness in the economy.